The original Castle dates back to the 12th Century, like the Castle of Graines, and was made up of a square tower surrounded by walls.

In around 1260 Pierre Sarriod of Introd enlarged the primitive construction and more changes were made in the 15th Century  giving it its present polygonal rounded shape which makes it stand out from the other castles in the area.  These changes marked the height of the lineage Sarriod, which reunited the nobility of Introd and La Tour (Saint-Pierre).

The Castle burnt down twice in the second half of 1800 and was restored at the beginning of 1900 by Chevalier Gonella, who used the services of the architect, Chevalley.

On the open space in front of the Castle the visitor can admire a magnificent structure preserved through the years – one of the rare examples of local  wooden architecture from the late Middle Ages: the fifteenth- century granary, where grain and seeds were stored.

Its two doors are fitted with wrought iron locks, both dating back to the original construction;  one is particularly beautiful and depicts a castle.

The castle, the property of Count Caracciolo of  Brienza, is “on-loan” to the Introd Council and managed by the Grand Paradis Foundation. 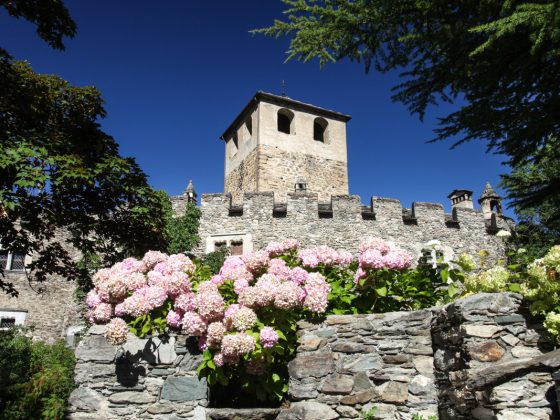