There are no evidences of the existence of a Roman fortress in Châtel-Argent, even though some signs (the presence of Roman bricks recycled in the chapel’s walls, discovery of inscriptions) tend to place some kind of settlement in this area.

The castle’s present look is due to different building periods: the most important dates back to 1274-1275 for certain, thanks to archives documents.

Excavations still ongoing have recently permitted to better know this monument. The castle was composed of three concentric walls, built along the edge of the “rocky terrace” which overlooks the churchyard.

In the third wall’s interior, in its highest point, a round tower stood: it measured about 52 feet in height and 29 feet in diameter and its walls were about 6 feet thick; the main entrance gate was 16 feet above ground level.

Six loopholes (three each floor of the two effectively used) allowed the light to get inside, where traces of the chimney and of the toilet are easily recognizable.

Most important for reconstructing the erecting yard are the outer traces of the spiral scaffold, which went up to the crenels. The cistern, enclosed by a stone vault and plastered with lime mortar mixed with hydraulic mortar, was South of the tower, as well as another building, which was surely subsequent to the tower and had a chimney.

Inside the second wall, is worth signaling the castle chapel too: dating back probably to the 11th-12th century, at present it is under repair and inside failing traces of frescos of the 13th century can be seen.

Châtel-Argent is an excellent panoramic viewpoint for the visitor. Eastward, in fact, the castles of Saint-Pierre, Sarriod de la Tour, Sarre and Aymavilles are visible. In the distance you can catch sight of the town of Aosta, surmounted by the Becca di Nona (3142 m. a.s.l.) and by Mont Emilius (3559 m. a.s.l.).

At the feet of Châtel-Argent “hill”, East of the village, along the road getting to Aymavilles, there is the built-up area of Chavonne. This is a very popular place, particularly during summer, due to the presence of the Rafting Adventure, of the Adventure Park and of a big  picnic area.

Westward, you can get a glimpse of the bell tower of the Introd parish church and, on the right-hand side, the Saint Nicolas churche’s one; Saint Nicolas is a municipality  located at 1200 m. a.s.l.. 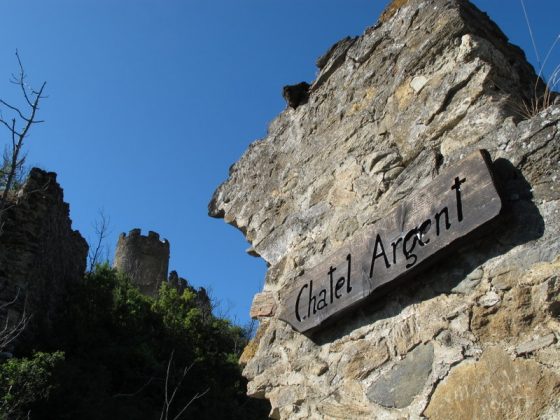