It’s one of the most important religious buildings in Aosta Valley. The most ancient testimony of its existence is quoted into a document, which dates back to the end of the 12th century.

However some archaeological excavations have brought to light walls of the 5th century A.D., which probably had formed an early Christian complex, composed by two buildings placed side by side (1 and 2) and joined by a baptistery (3).

In the centre of the baptistery, ruins of an octagonal font were discovered: it was deep and large enough to be used for baptism by immersion, which is a
ritual dating back to the period of the first Christianization.

There’s a third building to be placed between the early Christian church and the present edifice. It’s the early Middle Ages Church,
which had three apses opening on an only wide broad aisle.

In the 16th century the two central pillars of the broad aisle were demolished and replaced by a big central arch, and cross vaults with arches and groin ribs were built too.

Frescos on the vault arches, the building of the choir loft and of the rood beam date back to this period; the choir was enlarged and a sacristy was made under the bell tower and another one along the east side of the church, as well as two external chapels were erected along the south wall.

In the late 17th and early 18th century, the presbytery was raised, the present windows substituted the crenels and the baroque wooden altar was placed into the church.

Outstanding frescos are worthy of notice, among which we can list a “Holy Mary on the throne with Jesus Child, beside St John the Baptist and another saint” on the north wall, part of a fresco of the 14th century portraying St Maurice and the prophets’ pictorial cycle on the broad aisle’s arches dating 1546.

The Church was originally consecrated to the Virgin; it was the seat of the Parish until the end of the 18th century and precisely till 1792, when the new parish church was ended. 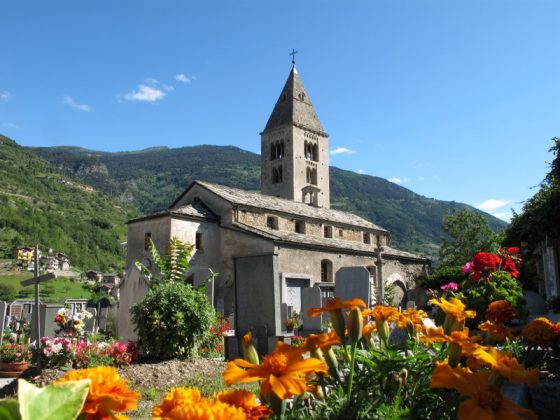