It’s in 1782 that Villeneuve’s villagers asked the Bishop De Sales to build a new church in the village, as the old one was too far from the centre and it caused many problems to the priest as well as to the parishioners.

Works started in 1787 and finished five years later: Mgr Solaro consecrated the new church to “Our Lady of the Assumption” in 1792.

Over the left side-altar dedicated to the Holy Mary, is placed the “Holy Mary of the Rosary” painting, which probably dates back to 1517. The right wooden carved side-altar, of the 8th century, partly gilt and painted, is consecrated to St Blasius; four twisted columns hold a painting
which dates back to the 18th century and portrays the Holy Mary with some saints.

In 1861 Giovanni Franzetti and his son made the church organ, which belongs to the 19th century classic Italian tradition. The main altar is made of polychromatic marbles, with tabernacle and tabernacleexposition throne; it has undergone important restoration works, which ended in 2009.

In 1914 Lancia painted the painting portraying Our Lady of the Assumption.

In 1975 the altar was made recycling the balustrades, which were removed, and was turned towards the parishioners in accordance with the liturgical reform. 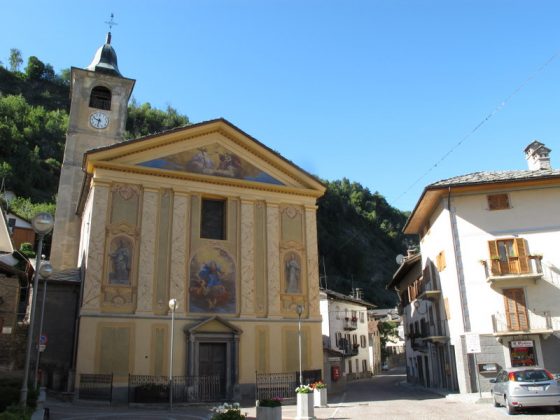